Ashe have a big monture

I wanted to take a big step in my animation quality. What does this mean?

I have invested 15 hours in making a loop that barely reaches 1 second. I have made a much more elaborate animation process. First I have studied how would be the movement if Ashe was riding a mount and at the same time a ****.

After making the sketch I made the inking and I took care of the lines to the maximum so that they looked uniform. When I had the ( ͡° ͜ʖ ͡°) version ready I had to do the SFW version, this included putting clothes on and removing the ****!

Once the loop was finished I had to look for bugs (and there were a few) and in the final version there are still some bugs (but I let you find them). Once finished I did the montage in premiere and added effects and music.

Hello friends! In episode 14 of the League of Legends animated series we pick up where episode 13 left off. Our heroes will start a massive fight against the enemies. Soraka vs IllaoiAhri vs SonaAshe Read more… 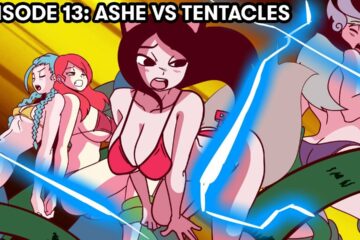 Hello my friends! In today’s episode you will see how the battle between the enemy team and Soraka continues to unfold. Ashe is pissed off because Illaoi’s tentacles have killed Velkoz. While Teemo is filming Read more…

Our beloved Soraka awakened her full power in episode 11 and is now ready to use it. Illaoi, Quinn and Sona join the battle. What they don’t know is that Soraka is too OP and Read more…